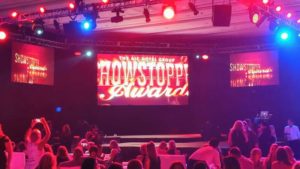 That’s what happens when you’re a top producing agent for AIC Hotel Group.

Over 200 agents from North America were awarded for all their hard work in selling AIC Hotel Group over the last year at the new Hard Rock Hotel Los Cabos on Tuesday, October 22. The numbers that determined this year’s winners are based on 2018’s production.

In its fourth year, the AIC Showstopper Awards provides the best agents and tour operators the rock star treatment – for more than just one night.

“This is our most important event of the year,” said Frank Maduro, Vice President of Marketing for AIC. “Travel agents make our business. They make it possible for us to do what we do.”

Ash Tembe, Vice President of Global Field Sales for AIC, echoed those sentiments.
“Agents are a key source for our distribution,” said Tembe. “We believe in travel agents. We do this for them. The investment we spend here is worth it to reward our top agents. Just wait until you see tonight.”

“If you look at the top players for AIC, a lot of them are Canadians. Canada is pretty much our number two market in the world (behind the US),” said Tembe.

The show began with an opening performance from the Freddie Mercury Experience and continued on with the top agents collecting their awards on stage and getting their photo taken with Maduro and AIC Hotel Group COO Rafael Chapur.

For agents, receiving these awards and the trip to Los Cabos is a great reward for all their hard work.

“It’s a great recognition of our office and our whole team,” said Kim Cook, owner of Love to Travel and Triple Platinum award winner. “It’s truly remarkable. I’m very grateful to our team. Hard Rock puts on amazing presentation and it’s so nice to be appreciated and the way they recognize travel agents.”

In addition to the trip to Mexico for the awards show, agents are here through the week to celebrate the official grand opening of Hard Rock Hotel Los Cabos.

“It’s amazing and I’m very grateful that I’m here and to experience the grand opening of Hard Rock Los Cabos,” said Kristi Mackedanz, travel agent and Triple Platinum award winner for Travel Leaders / Market Square. “In our industry, Hard Rock is the best at listening to their agents and they take our feedback to heart. They truly value agents and treat us so well.”

Of course, the party doesn’t stop on Thursday as in true Hard Rock fashion, it continues on to the weekend. An afternoon pool party with rapper Lil Jon on Friday is sure to kick the weekend off with a bang.

For travel agents who want to be part of the 2020 AIC Showstopper Awards, continue to sell the AIC properties as much as possible and you could be in a paradise location reaping the rewards.
The 2018 awards took place in Punta Cana. It is not yet known where the 2020 awards will take place, but agents can certainly expect a memorable week once again. Normally the event takes place in May, but this year was pushed back so agents could experience the new Hard Rock Hotel Los Cabos. AIC Hotel Group plans to return the event back to the month of May in 2020.