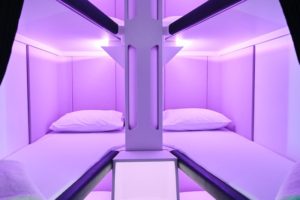 Air New Zealand has announced plans to test lie-flat beds in Economy class. The airline has filed patent and trademark applications for a new Economy Skynest product, which provides six full-length lie-flat sleep pods for Economy travelers. The airline will make a final decision on whether or not to launch the product next year.

Each sleeping pod will be over 200 cm (78 inches) long, and over 58 cm (22 inches) wide at the shoulder. Each pod will include a full-size pillow, sheets, blanket, ear plugs, privacy curtains and lighting designed for sleep. The airline said that it is also exploring other features, such as a separate reading light, a USB outlet for personal devices or a ventilation outlet. The Skynest will be in the Economy cabin, but its exact position is still to be determined.

Here’s a video of how the product works:

We see a future flying experience where an economy-class customer on long-haul flights would be able to book the Economy Skynest in addition to their Economy seat,” said General Manager of Customer Experience Nikki Goodman in a written statement.

The airline said that the product is the result of three years of research and development, with the input of more than 200 customers at its Hanger 22 innovation center in Auckland. Part of the airline’s “Future Aircraft Cabin Experience” program, the new product builds on the airline’s Economy Skycouch, a row of three Economy seats that convert into a flat, flexible surface that the airline first introduced in 2011 for families and couples traveling together.

Air New Zealand Head of Airline Programs Kerry Reeves warned that the scale of the challenge in developing the Economy Skynest and working through its certification with regulators is “immense” compared with the development of the Economy Skycouch. At the same time, Chief Marketing and Customer Officer Mike Tod said that developing the product is important as the airline operates some of the world’s longest flights, such as the upcoming Auckland – New York service, which takes up to 17 hours and 40 minutes one way.

Last fall, Air New Zealand and United Airlines announced plans to launch the first and only nonstop service between New Zealand and the East Coast of the United States. Starting this October, Air New Zealand will begin three-times-weekly nonstop service between Auckland and New York’s Newark Liberty International Airport. The airline said that it will make a final decision on whether to operate the Skynest next year after it has assessed the performance of its inaugural year of Auckland-New York operations.

Goodman noted that, should the new product prove successful, Air New Zealand expects other airlines to explore licensing it for their own aircraft, just as they have with the Economy Skycouch.