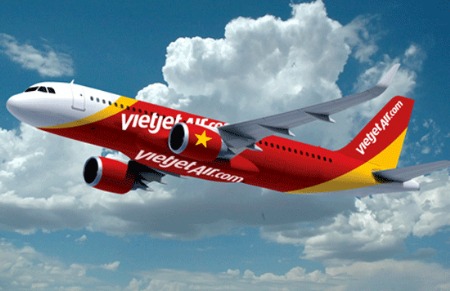 Vietjet Airways is planning to give away two million promotional tickets to help put the spotlight on its growing list of destinations and its modernizing fleet. The upstart low-cost carrier, which is known for its publicity stunts and its cheap fares, has managed to capture a large share of both domestic and regional markets at the expense of flag carrier Vietnam Airlines.

Currently, Vietjet has a fleet of 34 aircraft, mostly Airbus A320 and A321s. On the average day it operates about 200 flights serving a total of 47 destinations (sometimes with seasonal charter flights instead of regular commercial service). A majority of its flights are to destinations within Vietnam, but the carrier now also flies to Thailand, Singapore, South Korea, Taiwan, China and Myanmar.

A head-turning deal
The current two-million-ticket deal is certainly a head turner. Fares “start at” $0 (but do not include taxes and fees). To score the cheap or free flights, there are some strict booking rules. Tickets have to be booked between March 1 and March 8 for travel between March 15 and Dec. 31. Only tickets booked at a certain time of day will qualify for the promotional price. The window is 1-3 p.m., GMT+8. That is between 1 and 3 a.m. on the East Coast of the United States.

Luckily, Vietjet’s rise in popularity over the past five years has been partially due to the ease of online booking via its website or Facebook app. This tech-savvy feel, which mimics other successful low-cost carriers, has given Vietjet the edge over Vietnam Airlines when it comes to international travelers who want to book regional flights online. VA’s website is comparatively clunky, but, now, it does have all the same features as Vietjet’s (including Facebook booking).

Taking cues from other upstarts
Vietjet has taken other ideas from successful airlines and used them. Its flight attendants have retro uniforms that are reminiscent of Virgin Airlines. It has used wild stunts and sex appeal to get media attention (a la Spirit’s LA pole dancer truck). Vietjet’s pre-flight bikini contest on its maiden voyage to the beach resort of Nha Trang earned it fines from Vietnam’s air travel authorities and heaps of media coverage from outlets all around the world. One can only assume that the fines, which only added up to about $960, were already included in the production costs.

Signs of growth
There is a serious side to Vietjet too. It was among the first privately owned airlines in what is still officially a socialist country, and it was the first privately held carrier based in Vietnam to offer international service when it launched flights to Bangkok in 2013.

VJ has captured a large market share from flag carrier Vietnam Airlines, which is owned by the country’s government. However, judging by its “two-million ticket giveaway” and also the new aircraft orders that it made with Airbus at last year’s Dubai Air Show, Vietjet’s growth has not been hurt by any sort of favoritism from the government. Vietnam Airlines is, however, following the lead of other legacy carriers around the globe and creating its own low cost wing that will compete on domestic routes.

Meanwhile, Vietnam Airlines still dominates long haul routes, with $700 round trip fares from the United States (from both LA and San Francisco). Flights from other parts of the country can be found for under $1400. That said, on the domestic and regional markets, Vietjet is seriously challenging other regional carriers with its attention-getting promos.