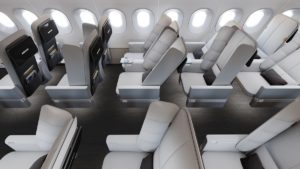 During this past week’s Aircraft Cabin Innovation Summit 2019, held in London December 3 – 5, 2019, and attended by airlines, aircraft manufacturers and designers, a potentially game-changing prototype caught the media’s attention.

CNN Travel reported on an innovative new seat design that would allow passengers flying in constricting coach seats a little extra comfort and even privacy.

The new seat styling, dubbed the ‘Interspace Seat Concept’ comes from Universal Movement, an offshoot of London-based design firm New Territory. In a sort of mission statement, Universal Movement’s website declares, “We believe that comfort, good posture and well being is a human right irrespective of financial status or social class.”

While airplane seat designs currently make use of adjustable headrests, the Interspace design takes the notion a step further by introducing a padded “wings” configuration that folds out from within the seatback, giving you a place to lean your shoulders and torso, as well as your head. In fact, the design has done away with the traditional headrest altogether, pointing out that regular home and office chairs don’t typically include them.

The wings fold manually into and out of the chair on either side, so that one or both can be unfurled at the same time; and this can be done without taking up extra space, or impeding upon others’ ability to move up and down the aisle. New Territory stressed to CNN that, although their profile is sleek, the wings are robust and sturdy.

The chair prototype on display at the summit was made of carbon fiber with a lightweight design, but the company speculates that the Interspace design could be easily retrofitted into existing aircraft seats, whatever material they’re comprised of.

Miles told CNN that the overall intention of the project is to offer passengers, “the ability to actually develop your space,” adding that he’s in conversations with a few air carriers who’ve already shown interest in Interspace.

So, while you can’t count on finding any extra legroom on your next Economy-class flight, you might soon have the ability to enjoy an extra degree of comfort supplied, courtesy of the seat itself.
For more information, visit universalmovement.io.