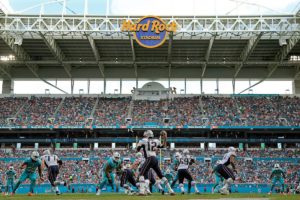 Hard Rock International has announced it will be airing its first commercial for the Super Bowl. With the big game being held at Hard Rock Stadium in South Florida, the timing couldn’t be more perfect. Of course, this won’t be any ordinary commercial.

This televised advertisement will sport an A-tier celebrity roster and be produced and directed by renowned Hollywood filmmaker Michael Bay. Rock and Bay’s collaboration was filmed at the world’s premiere Guitar Hotel at Seminole Hard Rock Hotel & Casino Hollywood.

To represent such an iconic brand at such an iconic event, Hard Rock knew that a team-up with Michael Bay would be the most pragmatic decision. With film credits including, “Armageddon,” the “Transformers” series, and “Bad Boys,” Bay not only has a very recognizable, grandiose style that will make for an unforgettable commercial, but he is also a Miami resident who will surely add some local flair.

With 31 hotels, 12 casinos and 251 cafes, the Hard Rock brand has already made a huge name for itself. Recognized as a world-class entertainment and lifestyle brand, Hard Rock holds more than 35,000 Hard Rock Live concerts yearly and possesses the world’s most valuable and extensive collection of music memorabilia.

The commercial will premiere during the first half of the broadcast and is slated to launch a new connection between guests, viewers and one of the world’s most recognized brands.