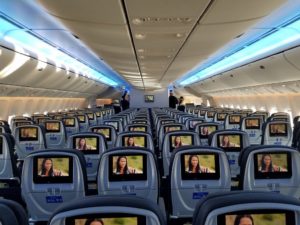 Actress Olivia Wilde is criticizing Etihad Airways for “cutting a lesbian scene featured in her film Booksmart” on their inflight entertainment system.

That makes for a compelling narrative – Mideast airline taking conservative approach to censorship, eliminating scenes where two women kiss but not heterosexual kissing – except things aren’t that simple at all. The same edited version is shown on Delta, while unedited versions are available on Air Canada, Air New Zealand and Singapore Airlines. By the way, here’s the Booksmart kissing scene I won’t embed it here and will leave it up to you whether it’s safe for work.

Three years ago Delta was under fire for showing a film with a lesbian kissing scene edited out. The 2015 film Carol was about an affair between a young female photographer and an older woman in the midst of a divorce. It’s set in New York City and stars Cate Blanchett and Rooney Mara.

What most people do not realize is that airlines do not edit films. They do not have the right to edit films. Studios or contracted third parties make edited versions available and just because kissing is removed from a film doesn’t mean the airline objected to kissing.

There may be some scenes in a film deemed not suitable for everyone on a plane, so the airline opts for the edited version; which means they take all the edits in the edited versions, they do not pick and choose.

Airlines will take edited versions of films to avoid references to planes crashing, or to remove the brands of competitor airlines (American Airlines was blurred out of Up in the Air when I watched it on other carriers). But what about sexual content? Some airlines show unedited versions, others take the studio edit and rely on passenger (and parent) discretion. What role should the airline play?

And what about passengers watching content on their own devices where other passengers can see what they’re watching, what’s the line for explicit scenes there?

A flight attendant in my Facebook feed once shared a story about a man taking such a long time in the lavatory that another passenger expressed concern – eventually the crew started to suspect a medical emergency. After much knocking he came out, iPad in hand. He went in there to watch a movie. That’s one way to handle the problem of other passengers seeing the explicit scenes on your personal device.

Wilde is calling for “some kind of governing board” to determine what should be censored on planes, though adds “If it’s not X-rated, surely it’s acceptable on an airplane.”