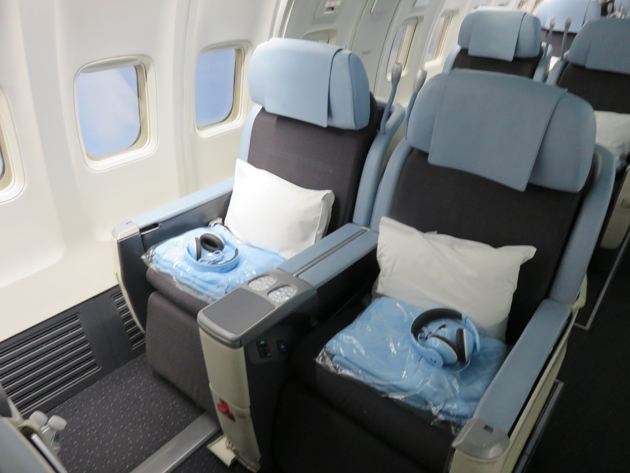 I’m back now to tell a very different story about a flight that actually worked, delivering on-time performance (actually a little early) in comfort and style. I’m talking about La Compagnie (The Company), the small French airline, with just two Boeing 757 aircraft, which is currently serving Paris and London from Newark.

La Compagnie is now a little more than a year old, having been started by CEO Frantz Yvelin and Deputy CEO Peter Luethi in June 2014. They are the same folks who introduced L’Avion, another business-class carrier on the Newark-Paris route, in 2006 at a time when a number of small business-class-only airlines were coming to market.

Back then L’Avion was joined by such startups as MaxJet (founded in 2003) Eos (2004) and SilverJet (2004), though those featured service from the New York area to London Stansted, while L’Avion was the only carrier to offer Paris service.

Today, of course, all those business-class airline startups are long gone. American Airlines in 2008 began offering special fare deals on business-class service into Stansted, which effectively put Eos, MaxJet and SilverJet out of business, though not all at once. As for L’Avion, it was sold to British Airways and now operates Newark-Paris service under the rather incongruous name of Open Skies.

Last year La Compagnie launched business-class service between Newark and Paris, offering some special two-for-one offers that were incredible values. And earlier this year, the boutique carrier began serving London (Luton) from Newark as well, again with some incredible fares. Currently the airline is featuring fares as low as $2,500 roundtrip for two, unheard of in business class.

So what is La Compagnie’s service like? This past month I finally got the chance to try it out on a roundtrip flight from Newark to Paris. The airline uses a Boeing 757 aircraft with 74 adjustable flatbed seats in a 2×2 configuration. Large overhead bins can accommodate almost any kind of carry-on luggage.

Check-in at Newark (Terminal B) was fast, efficient and friendly (remember there are a maximum of only 74 passengers, and this flight happily for me but sadly for La Compagnie, was less than half full). Passengers can then wait in a small business-class lounge just outside of the security area.

That might be considered an inconvenience when boarding, but the lounge is close to TSA screening area and passengers can use the business-class lane to get through to the gate, which is just a few steps away. The flight left on time at 8:45 p.m.

The modular flatbed seats are extremely comfortable and feature not a full entertainment system, but Samsung tablets that slide into the seatbacks. These tablets offer a selection of movies, TV shows (sitcoms), music (rock, jazz and classical), a small collection of digital books and newspapers, and flight information. Movies are not current, but most are in English, and if you’re a James Bond fan you’ll be very happy!

A light dinner, designed by a consulting French chef, was served 45 minutes into the flight, with good wines and drinks. Then passengers can move their seats into flatbed mode and sleep. A light breakfast is served roughly an hour before arrival at Paris’ Charles De Gaulle Airport (I timed this flight at just six hours and 20 minutes)

On arrival, passengers are provided with a fast-track pass to get through customs. The only downside is there is not gate on arrival, so passengers must board buses to get to the terminal.

Return service on La Compagnie was equally efficient and convenient. The shared business lounge was a bit cramped and overcrowded but you simply aren’t in it too long. Boarding just before the 11:30 a.m. departure time is efficient, even though this time 53 of the 74 seats were occupied. After a snack, a full lunch (a tuna salad appetizer, and a tasty beef dish or pasta) is served with wine an hour into the flight, and a snack is provided again about an hour and a half before landing in Newark. The total flight time is roughly eight and a half hours.

Sound good? Yes, this is the way flying should be. It remains to be seen whether La Compagnie will turn into a roaring success, especially given the track record of similar carriers in the past. The airline has its own frequent flyer program, but that’s not connected with the program of any other major carrier. It also has only two aircraft, so if one goes out of service, you’re stuck. But these days, if you read my US Airways column, that’s the case for the major airlines as well.

But La Compagnie delivers a smart, comfortable and efficient business-class service at a price that won’t break the bank. And that is making it an extremely attractive option for passengers from small businesses, as well as leisure travelers who want to get to Paris or London without the hassles of many major airlines.

I was one of the great boosters of such carriers as Eos and L’Avion, so hope La Compagnie succeeds in its battle to make flying a civil and enjoyable experience.