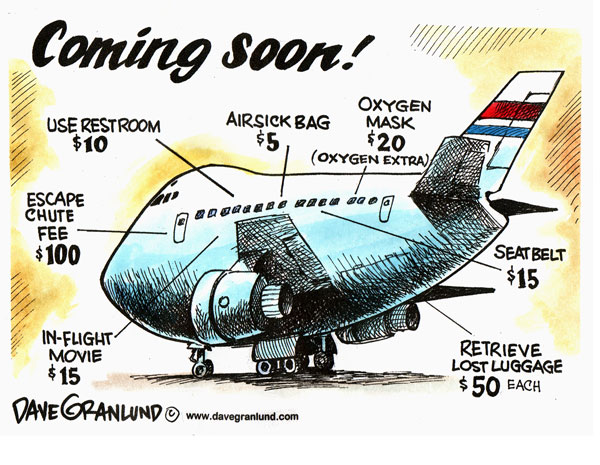 Sen. Richard Blumenthal (D-Conn.) delivered a Captain Renault-like shock on Tuesday with the release of a Senate Commerce Committee report on the airline industry.

In it, he found a “A staggering pattern of skyrocketing fees, so called ancillary fees, whether it’s checked baggage, change and cancellation, Wi-Fi, priority seating, boarding, all kinds of fees that make airline travel more expensive and more perilous pricewise.” Blumental, one of 22 members of the subcommittee on Aviation Operations, Safety, and Security, said the airlines raked in $38 billion in extra fees last year.

Now the Senate Commerce Committee wants the airlines to be more transparent in disclosing airline fees and to put a limit on such fees.

“These kinds of ancillary fee increases are part of the airlines’ new business model. We have to change that model,” Blumenthal said. “Here’s the bottom line: passengers right now are being nickeled and dimed, in fact dollared, to death and often it is concealed and hidden from them until they actually encounter it at the ticket counter. That is unfair and that is unwise so changing it should be mandated by the department of transportation and legislation if necessary.”

With all due respect to the good Senator – and please, keep fighting the good fight – tell us something we didn’t already know. Another committee member and the ranking Democrat, Sen. Bill Nelson of Florida, is threatening to include these ancillary fee changes when work on the legislation to reauthorize the Federal Aviation Administration begins later this year.

For better or worse, that’s what it’s going to take.

The Senate Commerce Committee found that airlines brought in $38 billion in ancillary fees last year. This isn’t a matter of trying to curb revenue as much as it is portraying it in a transparent manner to the flying public. In many ways it’s like booking a hotel room. $100 a nice for four nights, $400 right? Until you get to checkout when you get hit with the taxes and the, ahem, “resort fees.”
If Congress can’t eliminate the fees – and it probably can’t and, frankly, shouldn’t, lest we start messing with a capitalist society – at least make them more apparent and perhaps even more uniform. There simply doesn’t seem to be any rhyme or reason why having an increasing number of suitcases, for instances, automatically constitutes an escalating fee charge.

In fact, the Senate report noted in particular that airlines “gave the impression that when no ‘free’ seats were available at the time of ticket purchase, an additional fee would be required to secure a seat. … Consumers should understand that payment of a seating fee is not required if it is an airline’s policy to assign seats from available inventory at check-in.”

I wouldn’t mind the fees so much if the airlines were just up front about it, like they say they are.