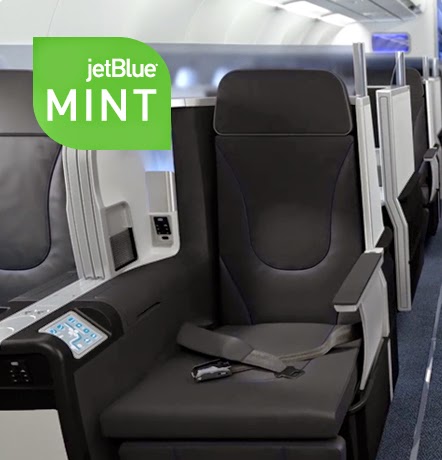 JetBlue will begin flying its Mint business-class seats on routes between New York and the Caribbean, according to The New York Times.

JetBlue first rolled out its Mint lie-flat suites last summer, abandoning its all-coach class format on select routes in an effort to lure high-spending business travelers. JetBlue currently offers Mint seating on its transcontinental routes between New York and both Los Angeles and San Francisco.
But starting in November, JetBlue will make Mint seats available on its planes that fly between New York JFK and the Caribbean destinations of Aruba and Barbados. The Times says JetBlue is expected to make a formal announcement on Monday.

JetBlue Mint to travel to Caribbean in high-flying style (The New York Times)
The move would make JetBlue the only U.S. carrier to use lie-flat seats on regularly scheduled service to the Caribbean, according to the Times.

Both the JFK-Aruba and JFK-Barbados routes average about 4-½ to five hours of flying time. That’s comparable with the transcontinental routes that JetBlue currently flies with Mint. JetBlue believes there is enough demand in those markets to support its lie-flat product.

“We know those are two markets that have high-end leisure premium demand,” Marty St. George, JetBlue’s EVP of commercial and planning, says to Times.

St. George tells the Times the performance of JetBlue’s Mint seats “has been way, way, way above expectations” since they debuted on the transcontinental routes.

Naturally, that’s also led to speculation about whether JetBlue could add Mint to similar flights from Boston, the airline’s second-busiest hub. St. George tells the Times it’s been discussed, but adds “we’re not making an announcement at this point.”