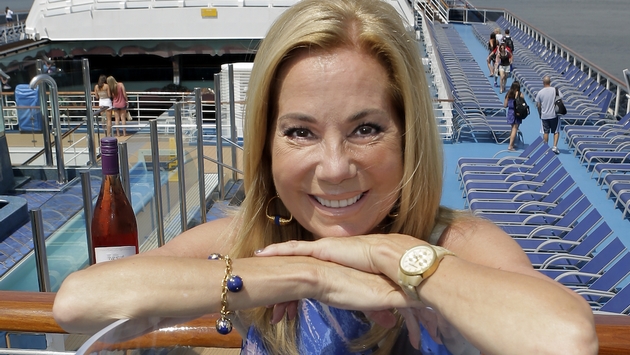 Somehow it seemed just right. Kathie Lee Gifford, who served as a spokesperson and TV commercial star for Carnival Cruise Line for 20 years starting in 1984, was back on board a Carnival ship on July 27. But this time she wasn’t promoting just the cruise line, but her own line of wines, specifically a new Pinot Noir Rosé, which will now be served aboard all Carnival ships.

Gifford, who is a host of NBC’s “Today” show, where she’s often seen sipping a glass of wine with her co-host Hoda Kotb, is now a Carnival brand partner with her GIFFT wine collection. She appeared on Carnival Splendor in Manhattan to officially launch her new Pinot Noir Rosé, which joins the GIFFT Red Blend and Chardonnay wines introduced on board Carnival’s ships in January. The wine retails for under $20 a bottle.

Gifford’s line of wines is created in consultation with Scheid Family Wines, one of the largest vineyard owners in California’s Monterey County. The limited-edition Pinot Noir Rosé is 100 percent estate-grown and features ripe strawberry, raspberry and red apple aromas with bright fruit flavors framed by a crisp, juicy acidity.

Gifford, who has also served as godmother to two Carnival ships, said she approached Carnival Corp. Chairman Micky Arison last year to ask him to partner with her on introducing her wines aboard his Carnival ships. The line now features three varietals available in the main dining rooms and many bars on all Carnival ships. Wine Enthusiast magazine has awarded the GIFFT red with 91 out of a possible 100 points, while the Chardonnay has received 88 points.

“I love that I’m launching our Pinot Noir Rosé aboard Carnival, with whom I’ve had such a fantastic partnership for so many years now,” Gifford said. “The fact that we can expand on that relationship through a love of wine is just all the better. I can’t imagine a better spot for folks to enjoy a glass of GIFFT wine than while relaxing out on the ocean aboard a Carnival ship!”

Gifford served as spokesperson for Carnival’s “Fun Ship” brand starting in 1984, when Carnival launched the first national television campaign in the cruise industry. She appeared and sang in the “If You Could See Me Now” and “Ain’t We Got Fun?” TV commercials. At that time, Carnival had just seven ships; today it has 24 vessels.

At her press event announcing the new wine, Gifford joked that she wasn’t even Carnival’s first choice as spokesperson. She said Kathy Lee Crosby, Joyce DeWitt, Sandy Duncan and Bernadette Peters all tested for the role that she eventually won and for which she became famous.