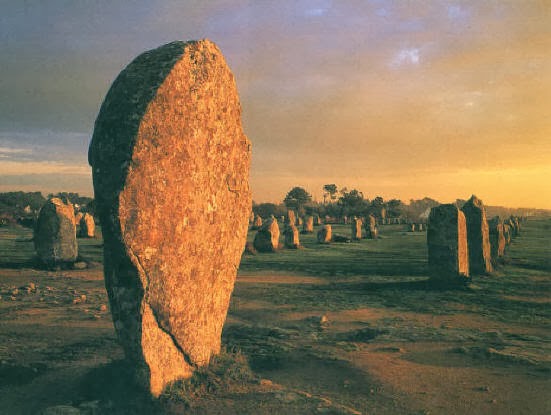 One does not go to Brittany, a peninsula jutting off of France’s northern coast towards Britain, for city delights (no offence). Paris, Marseilles, Bordeaux — these are the places to go for modern distraction. But if eerie mystery is more your style, Brittany rules par excellence. Particularly at Carnac.
Located on the windblown Bay of Morbihan, Carnac is the Continent’s answer to Stonehenge. If it were on crack.
If the sarcens of Stonehenge come in a set, at Carnac, we are talking “fleets.” Numbering in the thousands, clustering in groups scattered over several miles, the Carnac stones come in nearly every arrangement: lines, piles, squares, and stand-alone, although circular constructions like Stonehenge are curiously rare. At over 5,000 years old, which is older than the Druids (and for that matter, the wheel), who created Carnac remains a mystery, although it’s similarity to Stonehenge is undeniable. But whoever constructed either site remains a question mark; we have no idea who they were, where they came from, where they went, what language they spoke, or even if they were of the same ethic stock.
Carnac’s befuddling nature inspires hundreds of myths. The rows upon rows of stones gave rise to the popular story that they were a Roman legion petrified where they stood by Merlin himself. At night, people swear the Ankou, a spirit similar to the Grim Reaper, wheels his cart among the stones in search for souls to carry away. In that regard, some structures are clearly mortuary in nature—several structures are decidedly un-mysterious tombs, called dolmens. But the “legions” of monoliths? That is an ancient mystery modern minds still can’t figure; ideas range from astrological computers a la Stonehenge to, swear to God, seismic instruments.
It makes for a stunning stop on a road trip through the Breton countryside — like Stonehenge, the stones of Carnac are practically in the middle of nowhere, and the modern village of Carnac is fairly bucolic, but, on the upswing, pretty genuine and not particularly tourist-trappy. Keeping that in mind, once you are there, there isn’t that much to do besides wander through the rows of stones, chug a few back at the local pub, and avoid the occasional spirit of death. Nevertheless, long an independent Celtic kingdom separate from France, and with a language separate from French, Brittany revels in its nation-signifying mysteries. Set up your HQ in towns like Rennes or Brest, grab a car, and have at it.
Steele Luxury Travel is here to assist with your travel plans to France and beyond.  Luxury awaits at www.SteeleTravel.com