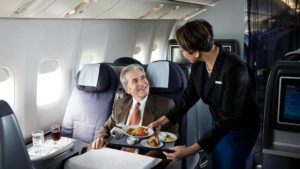 Live and Let’s Fly reported that United presented a media audience with plans to expand its domestic first-class meal pre-selection process, provide additional meal selections, and offer more plant-based and health-conscious fare in 2020, although no specific date has been set for the rollout.

CNBC reported that United Airlines’ Executive Chef, Gerry Gulli, explained at the event that the airline is focusing its menu expansion efforts heavily on plant-based options, presumably to cater to the rising number of vegan and vegetarian customers. According to CNBC, Gulli actively stays abreast of evolving food trends, and even collaborates with other culinary experts and celebrity chefs to design exotic dishes for in-flight service.

Additional meal choices are also among the major evolutions to United’s in-flight dining experience planned for next year. Special dietary needs will be better accommodated, with gluten-free, vegan and vegetarian meals available for selection up to 24 hours prior to departure tire on United.com or the mobile app.

More plant-based and vegetarian options are promised to arrive in both premium and economy classes in 2020, featuring such selections as red-beet hummus with roasted vegetables; roasted curry cauliflower with whipped hummus and pomegranate; and vegan stuffed grape leaves with dolma-infused yogurt.

United CEO Oscar Munoz said: “You eventually are going to see an ordering system where you will be able to secure the options that are available on your flight so you get your choice and we get to figure out the inventory better.”