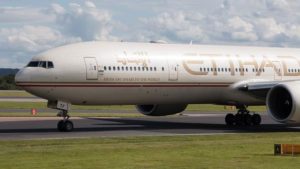 A British woman has been sentenced to six months in prison after getting drunk, soliciting sex and attacking crew members and fellow passengers during an Etihad Airways flight from Abu Dhabi to Manchester, England last year.

According to The Telegraph, 20-year-old Demi Burton asked multiple male passengers to go to the bathroom and join the “mile-high club” with her before a violent outburst shortly after takeoff.

Burton was allegedly already intoxicated when she boarded the plane but continued to drink red wine. “It appears she was drunk before getting on the flight and she started making a number of inappropriate sexual comments to a number of male passengers on the flight,” said Prosecutor Claire Brocklebank per The Telegraph.

“Two in particular remember hearing comments and at first they laughed it off but it then became more and more increasingly inappropriate and she asked them to join the mile high club,” added Brocklebank. “Both tried to end conversation with her but she carried on.”

Flight attendants eventually refused to serve her anymore alcohol, prompting a drunken outburst that lasted approximately four hours. “You may as well just land the plane now then!” she allegedly shouted before becoming violent. Burton was accused of biting, headbutting and kicking at both crew members and passengers who were trying to calm her down.

She was ultimately restrained by as many as six people and was removed from the plane by authorities upon landing in the U.K.

“It was a stressful situation but whilst I managed to remain calm and professional, it’s not acceptable for crew members to be treated this way and not fair on the other passengers to witness things like this,” flight attendant Fouzia Naim said in a statement via The Telegraph. “As a result of her being verbally abusive towards me and assaulting, I couldn’t eat or drink anything whilst the flight was ongoing.”

Burton’s defense was that she was drinking to combat her fear of flying and that she was under emotional stress caused by her return home to her “very controlling and very abusive” family.

Remarkably, Burton’s behavior isn’t unprecendented. Last July, a man was sentenced to six months in jail and ordered to pay a $172,000 fine after his drunken antics forced a Hawaiian Airlines to make an emergency landing in Honolulu and, in 2017, a couple believed to be under the influence of alcohol allegedly joined the Mile High Club from their seats.